Google is already master of all internet's words. Now it wants to oversee video too (#SavvyIndie #tech)

Video content just got a visibility boost: Google is indexing every website’s video embeds and listing them on Videos search.

I read a recent book-review on the success of Google’s choice to acquire YouTube in 2006. Just like Meta with WhatsApp & Instagram, within 3 years it had ousted the unbusinesslike community-minded founders and it was running as a successful arm of YT ad’s campaign, culminating in last year’s move to play ads on non-monetised channels like mine.

But it seems that hosting 62% of businesses content, and YouTube by Google itself being the 2nd most used search engine tool by consumers (after Google by Google), doesn’t quite feel enough like monopoly for the Silicon Valley outfit. So they’re beefing up Google’s Video search functionality, to cover more than just YouTube videos. In fact I believe they hope to (and may already) identify & organise 100% of videos embedded on the open-web.

Let’s take a search I hope anyone wanting to find 3m chunks of music-video amusement would love to make: ‘cerulean sounds video’.

The YT bias begins right on ‘All’ search, outranking my official website not just once, but twice with Capitalisation! 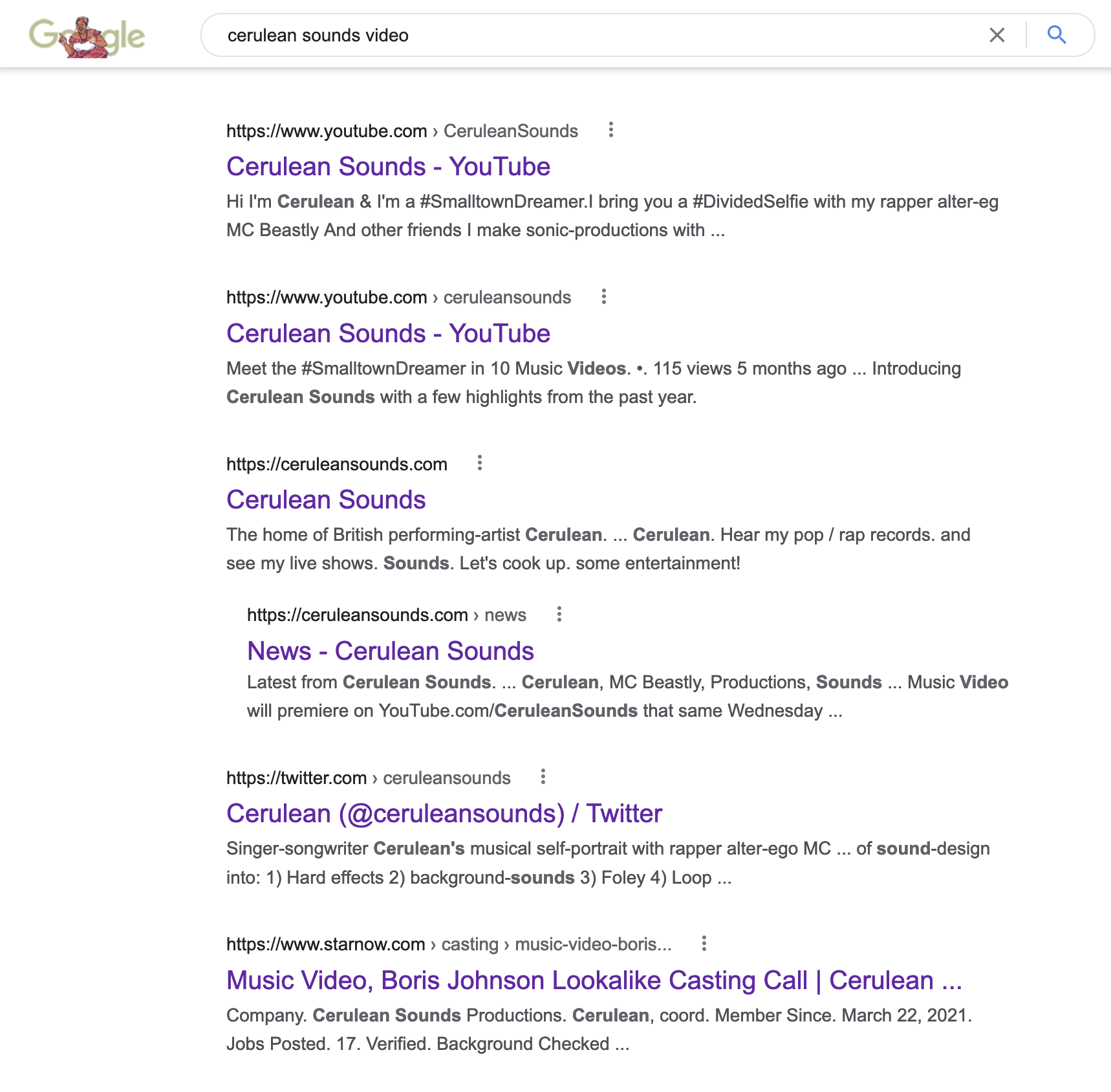 (side-note on StarNow result: I’d originally considered hiring a - ‘larger size’ - actor to play Boris in my latest ‘Become an MC’ music video, which ended up being much more meaningful with me in!)

Then, on the Videos tab, page 1 is almost entirely YouTube. But what’s new is that once you get down to page 2 you start to see videos ‘from’ a wider range of websites:

When independent websites like mine are featured, it’s almost always to showcase YouTube embeds, and hover Previews decrease leakage. However, 1st party social competitors are featured: TikTok and Facebook notably: 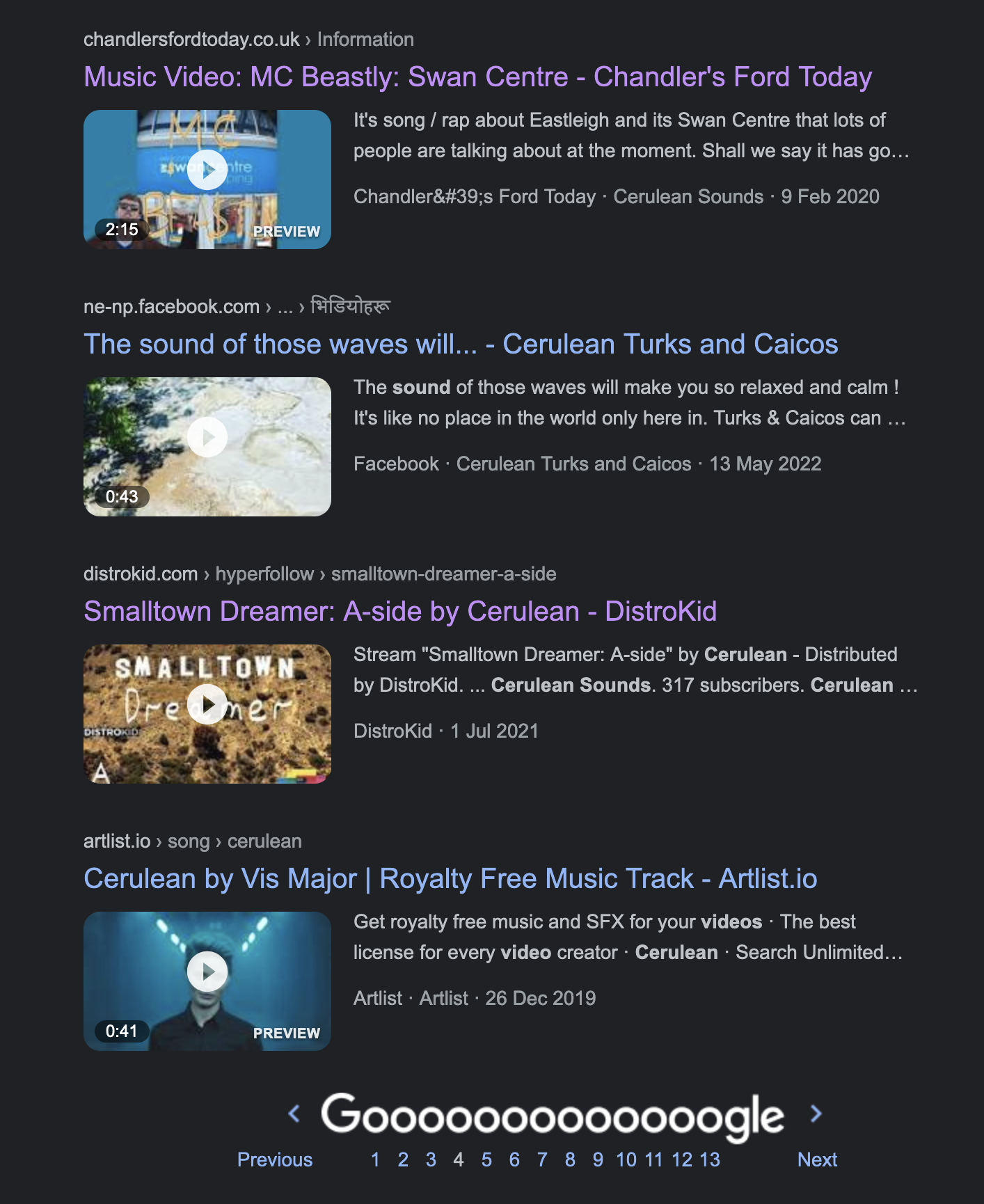 Notable absences are: Instagram (though I suspect that’s due to password-walling) and Vimeo. The latter is sinister: Google sees it as a direct competitor to YT so has long excluded it - along with DailyMotion. If you wanna see a fairer fight in action, head to Duck (which serves Microsoft Bing rankings) where you’ll see a lot of Vimeo (though unfortunately that’s not always a good things for more privacy-minded Vimeo users!).

Though all my websites are entirely divested of Google Analytics scripts, one of the few Google tools I continue to use (via my Proton email) is Google Search Console. you don’t have to sellout users, just your own DNS settings, and it can be a good tool to gain insight into how (Google’s skewing of) open-web search is gaining you visits.

I was recently informed over email that my videos had been ‘indexed’, a rollout coming to all websites. Let’s see which ones: 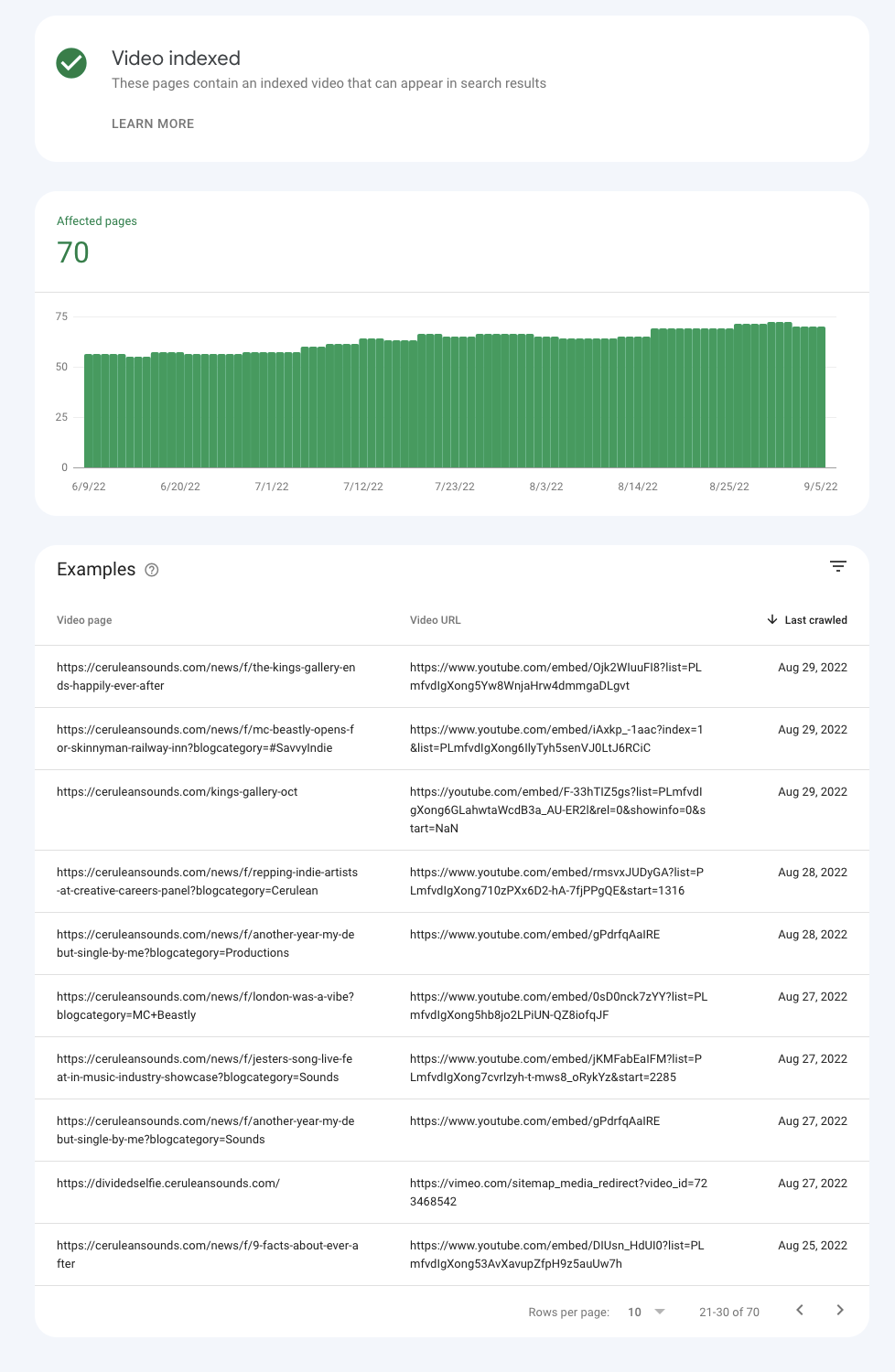 Mostly YouTube, though 2nd from bottom is a Vimeo embed. Let’s look at different types of video embed for each platform:

Where I do have an embed of a Public Vimeo vimeo.com/333771723 the URL they’ve indexed player.vimeo.com/video/333… can’t actually be displayed.

If you specifically don’t want an embedded video to be indexed, I think the only way to ensure this is to ensure the page it is on is not indexed. And no, despite what most intelligent techies - include the founders of this Micro.blog platform - think, a robots.txt page alone may not be enough:

stick a meta robots noindex tag on instead.

Many videos also don’t get indexed due to errors, most commonly for me:

1) Could not determine prominent video:

“When Google indexes a page it looks for videos on the page. If any videos are found on the page, Google will try to index the best candidate on the page.” “Google was unable to find a video that could be considered prominent enough to qualify as the video for this page. We recommend fixing other issues before fixing this one. In some cases, this issue might be caused by rendering issues in Googlebot, so you might not be able to fix it, but you should ensure that the video is reasonably prominent on your page. Try using the URL Inspection report’s live test on your page and examine the screenshot to see the page as Google sees it. (Inspect the page URL, then click Test live URL > View tested page > Screenshot). If the video is outside of the initial screen position, you’ll need to try another test method.”

Just Curator.io embeds e.g www.youtube.com/embed/LYa… I actually removed YT from homepage Curator embed to avoid any downranking due to duplication. 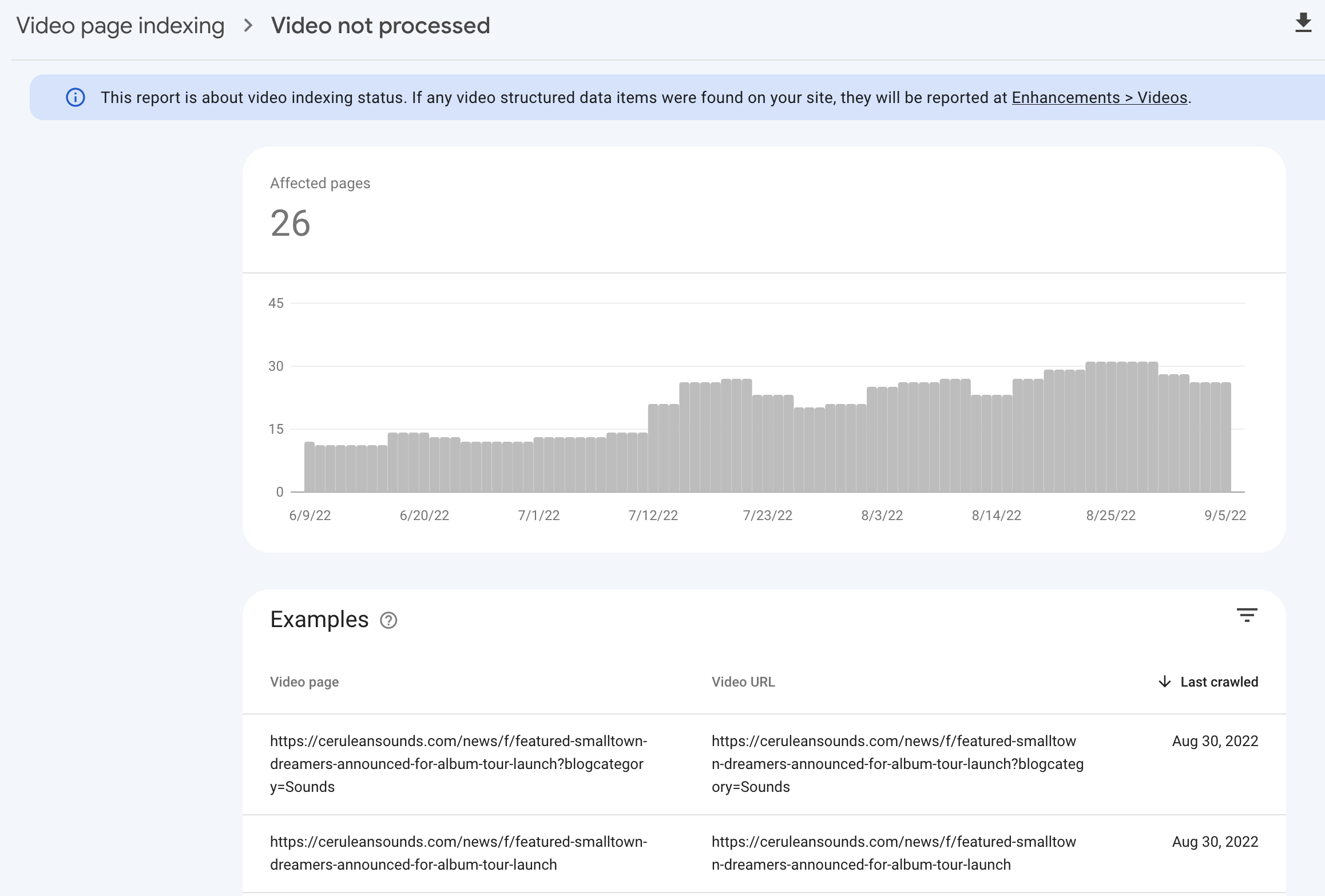 “Video not processed Google detected that the page has at least one video on it, but decided not to index the video.”

Those URLs are just the blog page URLs themselves, so probably just some early-product gremlins from the Goog!

For better or worse (definitely worse) Google’s search monopoly means it’s the de facto gatekeeper to open-web content. So if you’re a content-creator interested in reaching people beyond a single-silo, you have to pay attention to how Google showcase your content.
This latest change suggests Google - like Meta with its FB review and botched Gram one - is looking at TikTok’s explosion and re-evaluating it’s future product to push video harder.
So there’s never been a better time to start creating entertaining videos to reach people, and in particular artists need to move up the multimedia food-chain: words < audio < video

“[don’t] print some book which nobody reads Try making a sound 3-minute song
Music’s the food I love, play on “- ‘Lit’ - MC Beastly

And then be sure to make a music video for it!
Admittedly that track didn’t get visuals, but the S1GHT tracks on the concept-album did.
Plus I’m 2-tracks off converting the debut MC Beastly record into a full half-hour visual album, which I’ll re-distribute to music-streaming too via new tool DistroVid.

Check my #SavvyIndie resources or reach out to me for 1:1 coaching on making lit content for the internet and marketing it through the open-web.