critTLDs: Trademark-proof Domain Names; or, How to Irk Trump's Lawyers for 20 bucks (#tech)

Want to be 100% sure that your domain name is uncensorable e.g. by a trademark owner? Register at a critical TLD: a TLD which is itself a critical or negative word. I’ve coined ‘critTLD’ for short as a new WORD.
Why? A site that is actively critical of a brand is self-evidently not pretending to be the brand: brands don’t tend to criticise themselves, so you can’t be accused of “passing off” (Appendix for deets).

I believe in the mid-2010s specific major IP legal cases were won on this one to set the precedent. Probably why it’s so expensive.

Except certain specific contexts, I’d deem brandname.thesetlds to be a critical phrase:

I’m aware there’s also some associated with adult websites, but I don’t do that part of the internet anymore.

We’ve just observed the anniversary of the Trumpist botched Jan 6th coup, so let’s check in with what the walking brand is cooking up now: 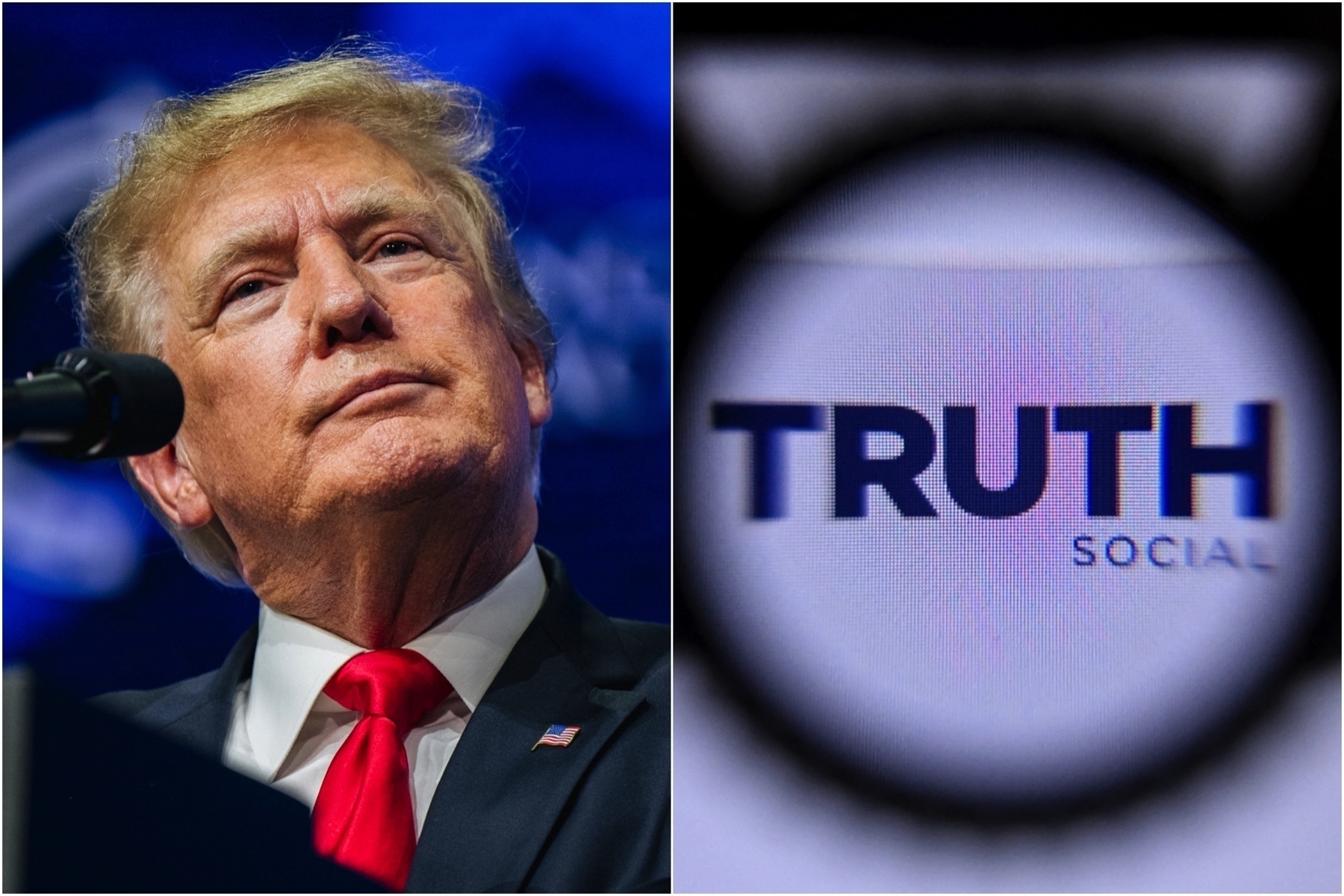 And Social Media. Because politicians these days wa.rner.me/2021/04/2…

When building the tech which beta’d at TruthSocial.com, Mr. Trump didn’t have much respect for Mastodon’s open-source license (see Mashable article), and has eventually done the bare minimum to escape legal ramifications. I downloaded the folder on their “Open Source” page so you didn’t have to: and yup it’s literally a (now 2 month old) fork of Mastodon’s GitHub: 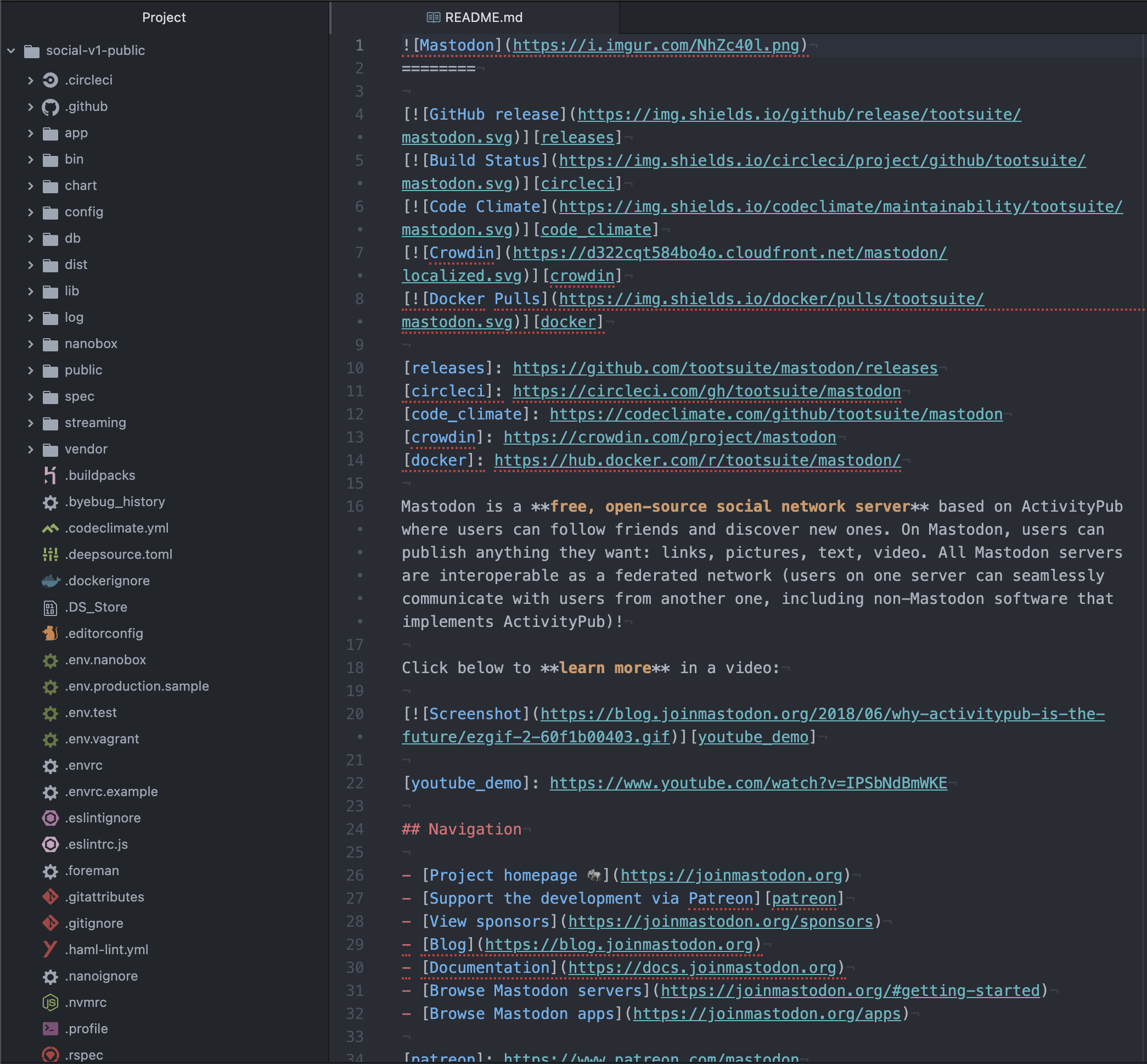 Yup, TruthSocial seems like a brand which will recognize trademark strategy. In fact, I imagine they will positively respect trademark-proof domaining.

And it will be necessary, given that Trump’s lawyers seem to be trying to own the ‘truth(social)’ (HuffPost exposé).

I’m too poor to afford this - and have too positive an internet presence to execute on it effectively - but good satirists (shouldn’t be too hard, he turned ‘Toots’ into ‘Truths’) to snap up one of the following available domains. The internet needs great parody & criticism to make sure this wonderful technology doesn’t systematically favour populists, as it has seemed in the 2010s. Let me know if anyone ever grabs:

This one would be perfect for a site explaining how TruthSocial was built on the cheap as an uncrediting knock-off of an existing social media project. Unfortunately not that cheap to register at $21 ironically.

The same price, which upsets my stomach, but this could be a good base to collect all the ways Trump’s social media venture screws over its users as we go, rather than waiting for a Frances Haugen to pop up in 2031.

And here’s two TLDs whic usually aren’t crit-TLDs, but can possibly be argued as such in the context:

I don’t go in for the sort of sexism-ageism double-whammy that the ‘Karen’ trope plays on, but if you do, this’ll be the one for you to poke fun at the Republican variant, who’ll post dramatic messages about why they’re done with SocialMedia & Technology companies, on a platform run by T MEDIA TECH.
Go quick on this one, cos lawyers might snap this one up as a posiTLD for the Big Man to award Mother’s Crosses or the suchlike to the best Family gunplay photo posters (early odds on Lauren Boebert).

You’d have to explain to the judge how a DomainH.ac/k works, the ‘Socialist’ pun could work well for a parody of the times Trump has contravened his stated economically conservativism and acted like a pinko commie (as Mark Manson puts it) - such as claiming £3m+ in foreign state aid (recent Guardian exposé on UK furlough).
Unfortunately given it’s a Turkish (Istanbul) domain you might have to deal with the censorship whims of another populist strongman.

But if you’re someone who doesn’t mind a bit of that, and also dislikes having your digital assets requisitioned by IP lawyers, crit-TLDs could be the ones for you!

When a brand has the spare change to register their name as a trademark, they are often legally empowered to control your use of a domain name containing that word, as Harry & Meghan tried to with Archewell.Name - with the (often spurious) justification that you are “passing off” - i.e. pretending to be their brand, and in extreme examples can aim to seize ownership of the domain.
In many cases their claim will be frivolous (late in that case), or you can find friendly hosting providers.
Got an Intellectual Property (IP) lawyer in the fam, so you find out interesting things like how to avoid that possibility.

A2. TruthSocial to avoid

It’s business model is to actively ransom brands & their critics by charging an extortionate amount to host their generic templated version of TrustPilot.
A business model Trump himself would be proud of!
Ironically, internet.bs, one of the few providers to retail the TLD, is using a ccTLD which should arguably be on the list: that of the Bahamas 🇧🇸. I asked their support whether their choice of TLD was ironic in which case I’d add them to the DomainH.ac roll of honour but they claimed they’re playing it straight as their Bahamas based (though I’m not sure if there’s anything straight about that anyway).

TruthSocial/ Handshake Name
Handshake names have the potential to completely render this whole topic obsolete. The NFT system behind HNS is claimed to be uncensorable because it’s fully decentralised.
New brands like Trump’s are in danger, as they aren’t on the Alexa top 200k protected list.
This one did eventually go (NameBase biding page), with top bidder staking 250HNS ~= $(w/o carbon credits)100. You’d probably have to put in an extortionate bid now: the carbon credits (read my recent exposé) I believe you should purchase would probably blow the bank.

A3. Character Limit: can Trump stay brief enough for Mastodon?

In fact it wasn’t a “platform” or “space”, it’s simply a blog, as long time blogger John Gruber pointed out.

And barely that! As Micro.blog founder Manton Reece observed, it’s a “half-baked” blog!

On a superficial look, they look like Trump tweets: a bit of CAPS LOCK and some Unnecessarily Capitalised sections like in a Dickens Novel.

But upon closer analysis (not quite as close as my buddy Bhargav’s was of his tweets) it looks like he had help: 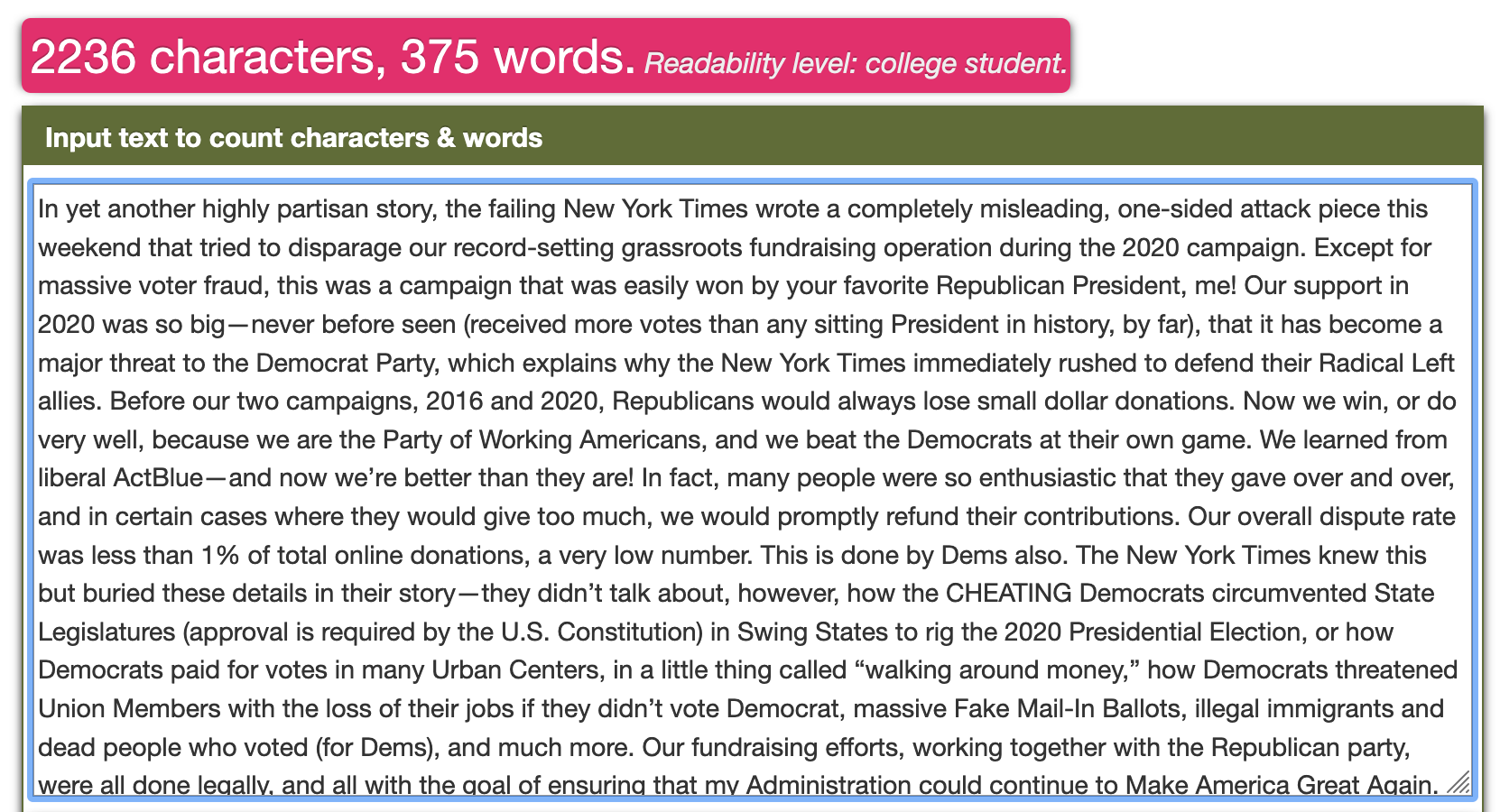 I mean 2000+ characters at College Reading Level. He must have help!

So how well thought through was this? It began with no pre-amble - no “Hello World”, no intro post - on March 24th just this: 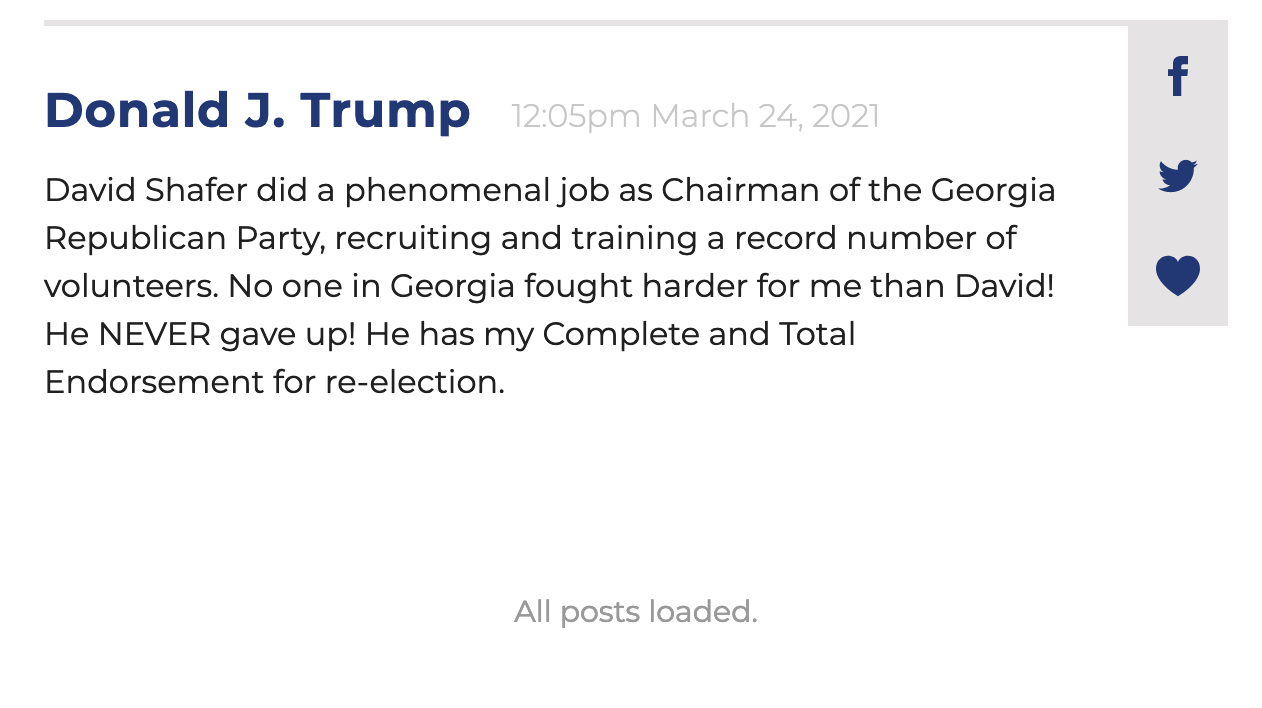 And since then, the devotion to brevity which Twitter demanded has slipped, and one also suspects with it his patience for doing it himself.

Dom Cummings’s has bizarrely abandoned with his remarkably successful longform personal blog, in favour of the Substack fad - he can’t even be bothered to pay the $50 (less than 1 of his annual subscriptions) to Substack to use a custom domain.
Hey even Trump’s lot figured out how to buy one of those!

The official Mastodon.Social & Mastodon.Online which I’m on both use a 500 character limit.

Will TruthSocial stick with that? And will Trump be able to manage posts of that length himself? Let’s find out.