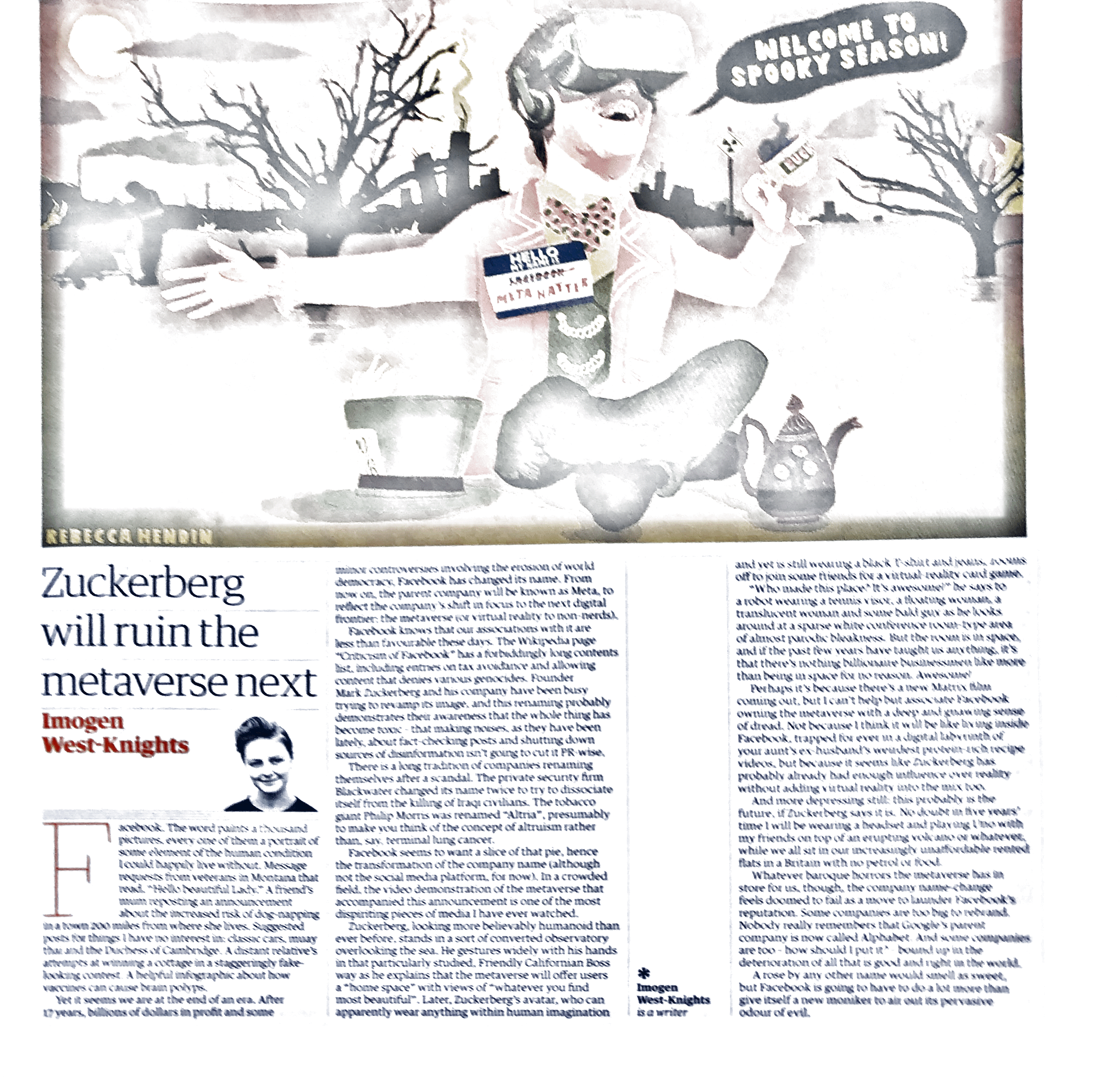 Imogen West-Knights is clearly a brilliant writer & wordsmith.
BLLW is almost as good as good a privilege-parody Twitter as Titania McGrath, and in about 2 years time we’ll be able to read her words printed onto hardback for like £20, as she’s getting a novel published.

But I don’t believe she’s ever showed real interest in technology, in particular Virtual Reality (unless you count Love Island, which sometimes seems like it!).

So whilst it’s cool to hear a very well written take of watching a tech launch:

The Guardian are in danger of making one of the biggest errors in tech media that Doctorow calls ‘criti-hype‘: that is accidentally hypeing an evil BigTech company in the guise of criticising them.

Specifically, scaremongering around the fate of the ‘digital world’, in particular taking a “they’re coming for our jobs” rhetoric to:

it’s coming for the metaverse

is actually counterproductive in fighting Zuck.
Assuming ‘the metaverse’ is even an important concept worthy of analysis actually plays into FB’s game.
There’s no reason a co-linear virtual world - based on a word dreamt up in a Neal Stephenson fever dream - is A Big Thing. Why not just call BS - as I have - and point out that the name was plucked for expediency out of their existing domain name ownership, and keep calling them more accurate names (like FakeBook).

Or pick up from the theme in your main coverage of the fact that FB have failed to even run the name through one of their (no doubt spookily good AI) translators:

Maybe we could have had an opinion piece riffing on how this brilliantly hammers home Haugen’s revelations that Facebook consistently under-resources non-English-language moderation.

Instead we get a normie writer parroting Zuck’s language.

I could understand picking a non-technical writer here for the ‘FB destroyed reality angle’ if it was a devoted anti-FB campaginer (like Tanya Goodin, or a yoof from the Log Off Movement). But she’s not: she’s just another educated young Brit who gradually slid to the gram over the past half-decade and couldn’t even be bothered to delete their discoverable profile with 912 friends. Doesn’t seem like someone who’s really putting money where mouth is when it comes to disowning Facebook, and some of the contactability benefits it brings.

I know a name & background (yeah I recognise her from my short stint stooging for some oily Old Etonians called Oppidan Education, who she’s still actively working for!) like that can get you a long way at the Grauniad, but with actual experts like John Naughton on hand over at Observer, and many exciting young techies turned writers, why choose an unpublished novelist and pop culture pundit on this one?

Whilst tech innovation is often over-hyped, it is sometimes earth-shatteringly important, and it takes an expert to tell the difference.
Grauniad: if you wanna be the smartest paper, pick the smartest writers for the topic. Otherwise you’ll bleed readers to The Times.

And if you needed proof that the ‘forever’ notion backed into the concept of ‘the metaverse’ is overhyped, and the Facebook network’s recent blackout wasn’t enough, look at your owns tory: 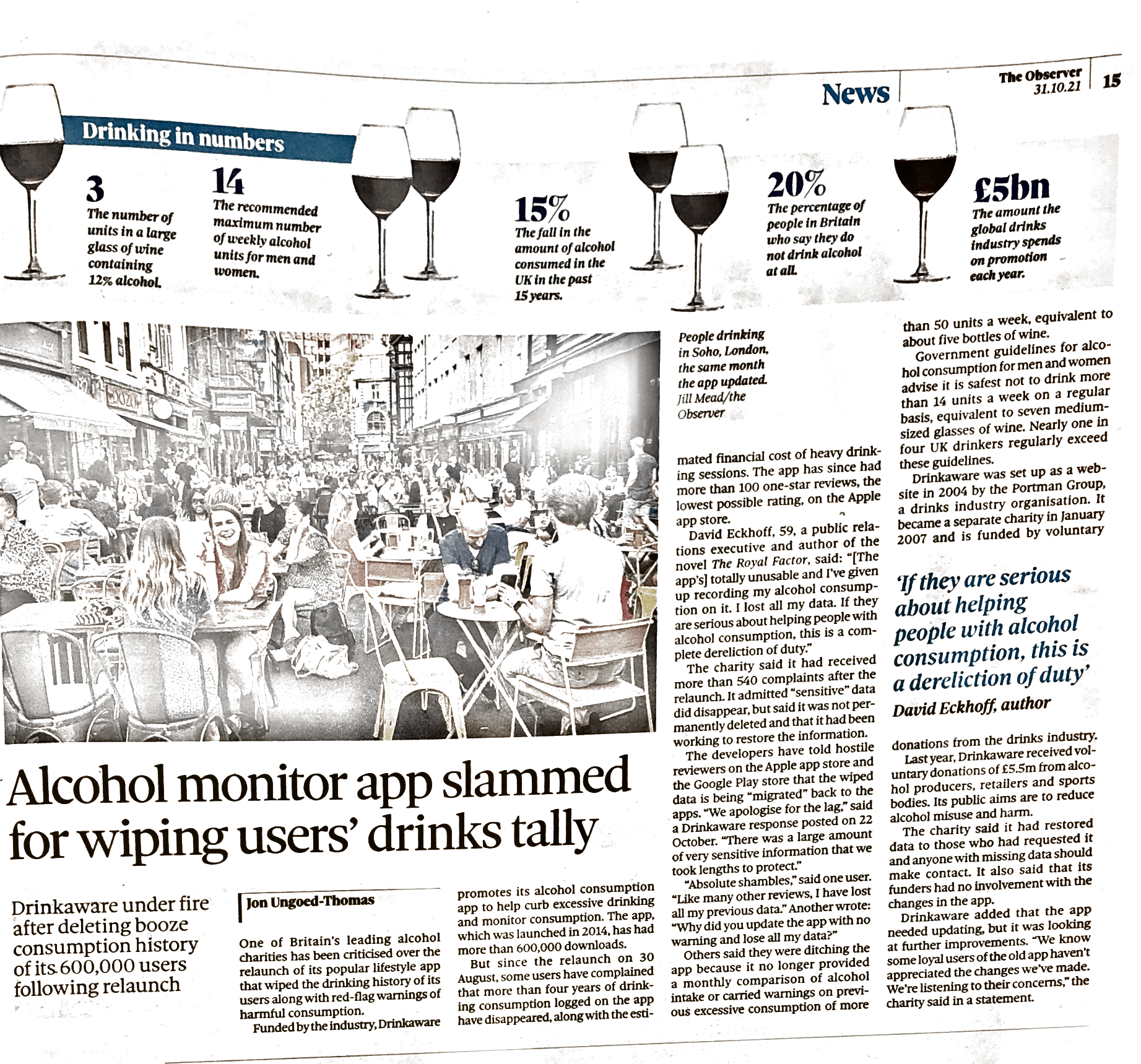 Hey, according to the data everyone’s been as teetotal as me these past two years!