2 days ago on April 22nd, I wrote a rare politics think piece on the need for (Lib Dem) MPs to skill up on ‘humane tech’, both in terms of regulation policy and personal usage. I ended with the following lines:

“Heck - even if they’re doing a Cummings with a vanilla Wordpress blog without a custom favicon, at least they’re doing some indie digital comms.”

I didn’t suspect that in the following 2 days my observations that more MPs would do well to have personal blogs would be so vindicated by Mr. Cummings himself.

I did my weekly Saturday shop (Tesco, not Cam-azon Fresh) and saw the same front-page story: “Cummings declares *war*”.

War? What new arts did he pluck from Sun-Tzu? No, a war of words no doubt. But how did he deliver these words? Another TV press conference? Some obscure Press-Kit?

Turns out it’s a cyber war. By which I mean… Dominic logged into dominiccummings.com/wp-admin and drafted a plain English, media-free post (only 2 printed pages worth which is short for him) and yesterday clicked publish.

And clearly I’m not the only one following his blog, via that sorely under-rated tech RSS Feed: 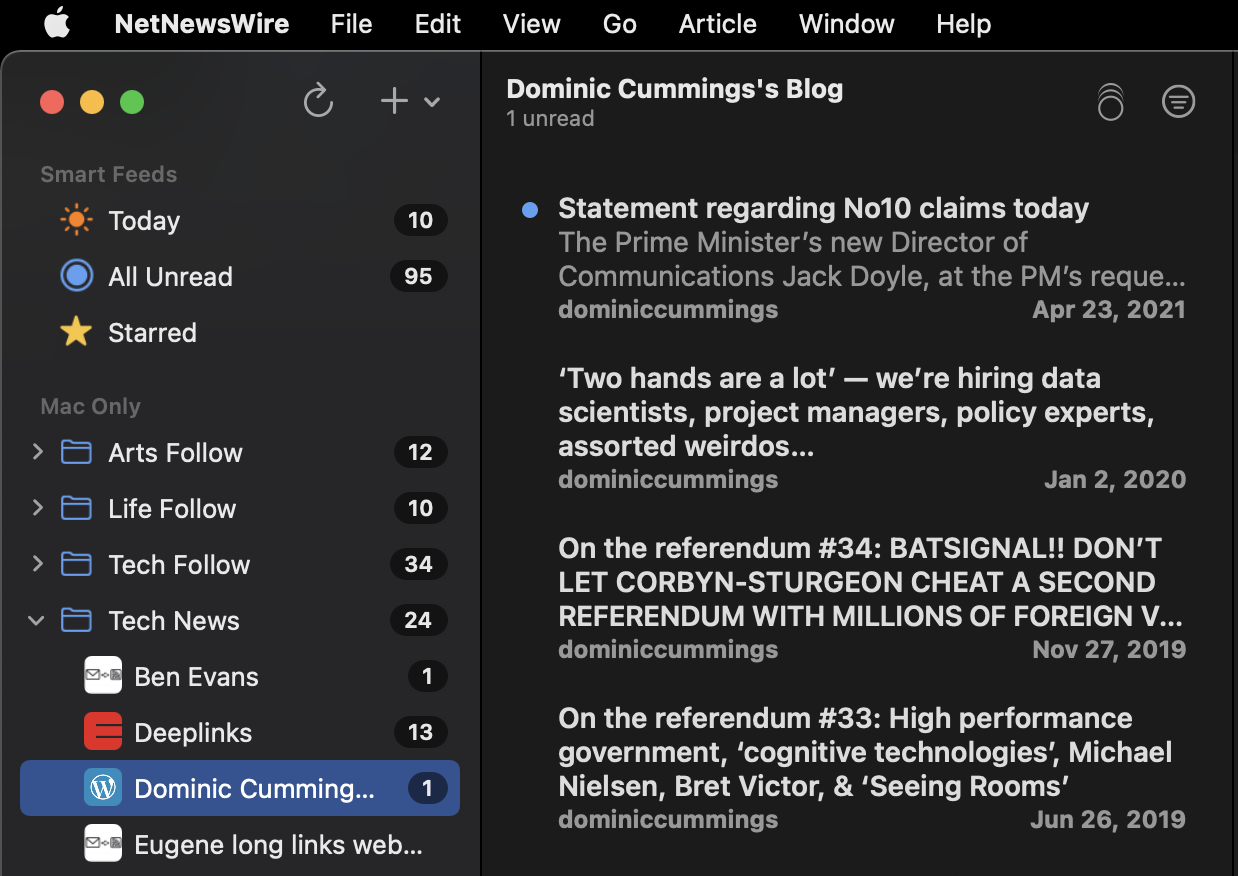 “But surely he sent the blog link directly to press?” you say. Yeah sure: a single definitive link to send to people! How much simpler than Boris’s world of million-pound TV press studios with no Press Secretary to present (since sacking Stratton).

Yesterday alone, Boris made 5 tweets, including a couple bits of patriotic fluff, and this one, in which Boris slams the Post Office for technological incompetence:

Which the papers minorly parroted:

On the other hand, Dom stayed quiet for over a year on his channel, so we knew this would be good.

I actually printed Dom’s piece to read (hey he kept it to a single two-sided sheet).
And I wasn’t the only one who printed it. Millions of copies of newspapers essentially re-printed his words verbatim. 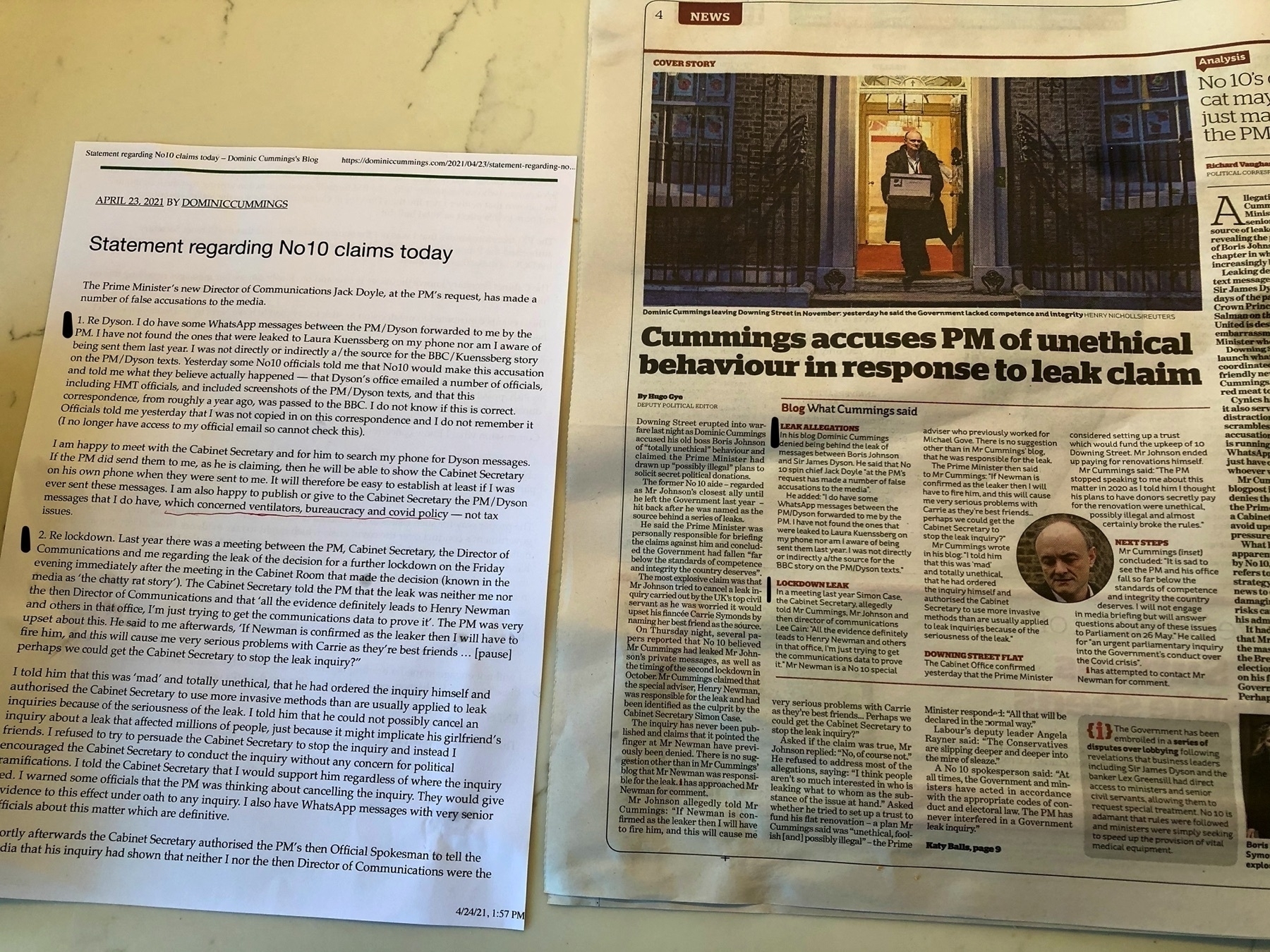 Note how they borrowed his 4 header summaries. Admittedly, the i is one of the less opinionated and more descriptive (and for my purposes cheaper) outlets, but still they parroted it very closely.

And they put it on the front page.

I described Cummings’s blog as “vanilla” because it is largely uncustomized from a theme, and that theme is not very flattering anyway.

If you’re considering starting your own blog, I’d recommend using Micro.blog instead of Wordpress for a start.

2) You don’t have to be mad tech-savvy

No doubt Dom is not the most tech-savvy. He still rocks a Gmail: 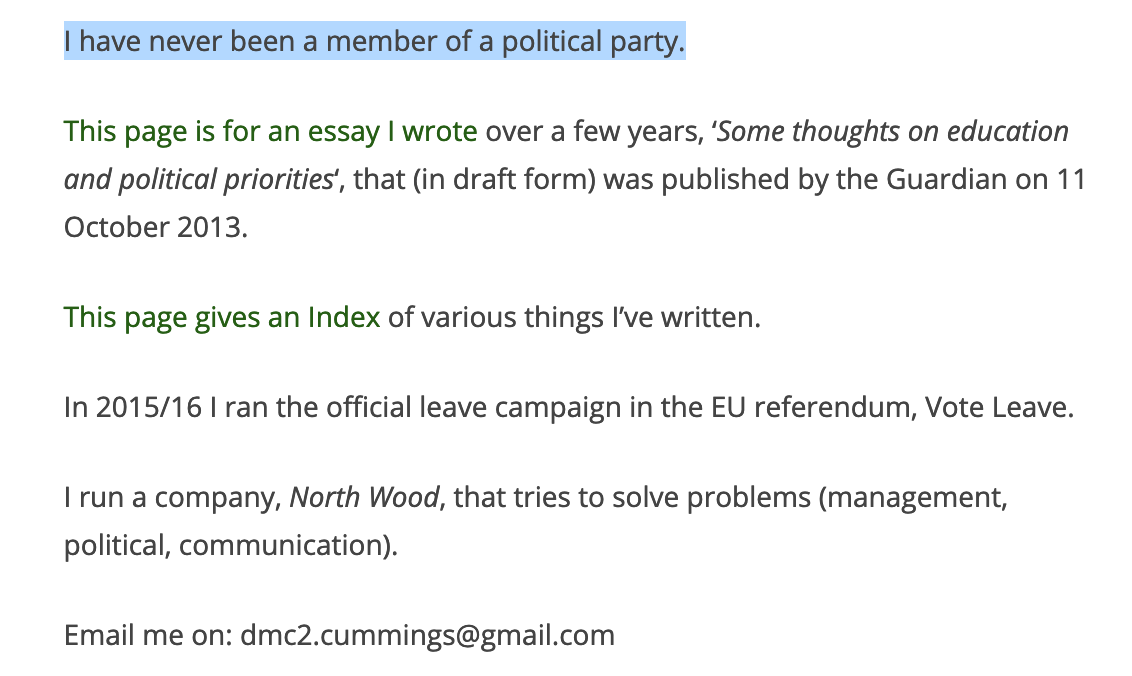 But I’m still waiting to hear if there’s an MP who is “explicitly self-regulating, their social usage & presence based on protest to Big Tech? Or at least experimenting with also using 1 or 2 humane-designed tech tools”.

So until then I’m forced to conclude that none of the MPs are behind Cummings in terms of a sustainable personal digital comms strategy.

The next time someone says to you “you have to be on X social media platforms (for your work)”, just send them this:

** a blog post - not syndicated to socials - dictated front page news the next day**.

I’ll make a criticism about Boris that has less chance of sticking on him that he does to a policy: Boris is not tech-savvy. 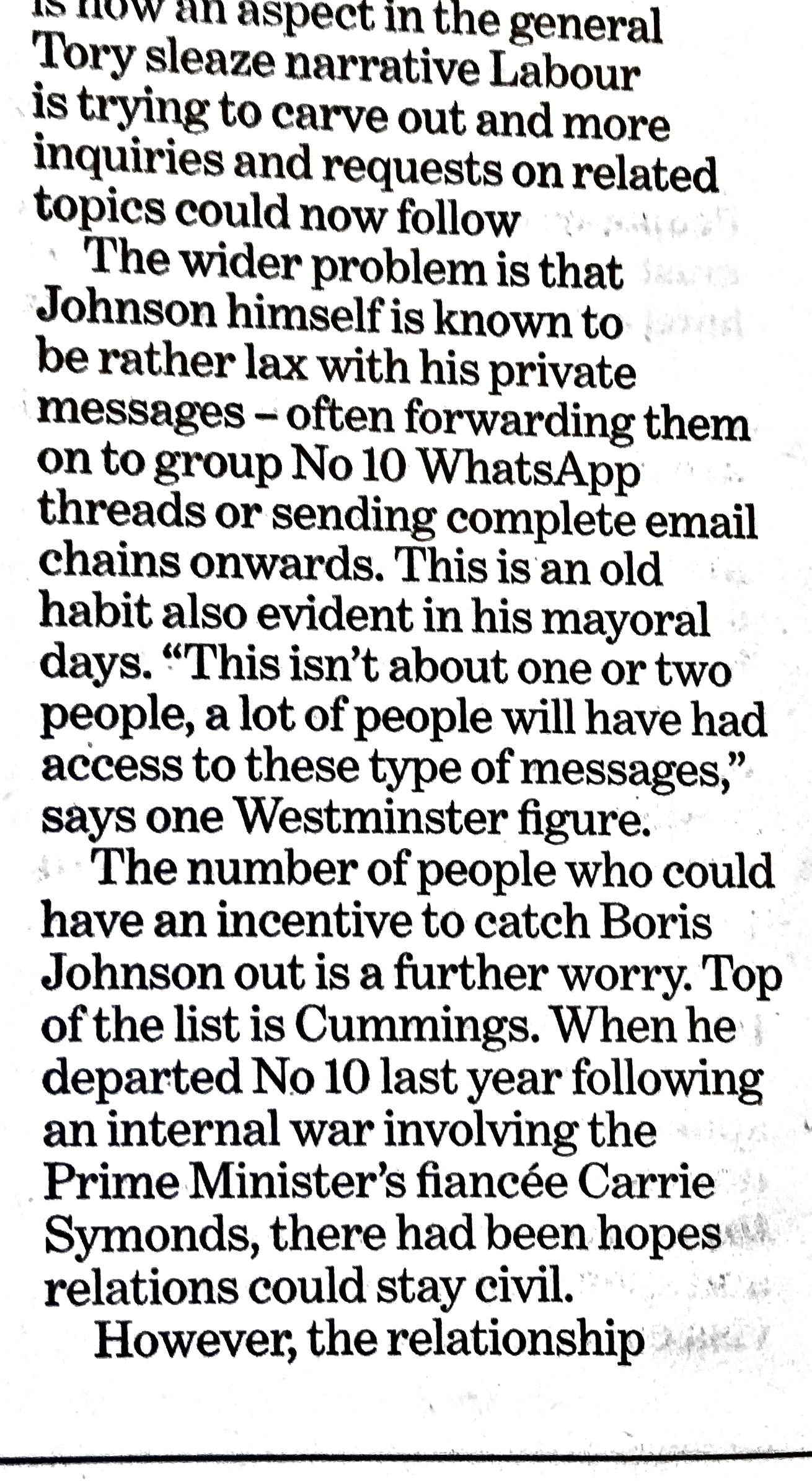 His base won’t really care: he’s a people-person that’s what he does.
Like Matthew McConaughey, most people “prefer the asshole to the dork”.

But still, we surely should expect a minimal level of competence with the tools he uses, given that he apparently runs government by WhatsApp. If they’re going to use a leaky surveillance capitalism tool, could they at least use an effective one, say government by Slack?

This is the guy who slammed the Post Office over their naivety of errors in the Horizon software. Who is he going to blame if it turns out China get hold of national secrets via WhatsApp?

Frankly he should be using better leaky tools, or non-leaky tools like Signal, which made the encryption tech WhatsApp adopted. This comes back to a general principle which is: go back to the most enduring technologies. Like blogs at custom domains for official personal press releases.

But given that he uses leaky tools in a particularly leaky manner, perhaps Boris not consider just biting the bullet and having a more transparent digital comms strategy like Dom?

I for one would RSS subscribe to Boris’sBrilliant.Blog (“Carrie why won’t it let me do an apostrophe on this bloody web domain thing?!”)

I don’t wanna pretend Cummings is an actual advocate for humane tech. He’s self-centered no doubt (I mean who else would childishly celebrate they’ve never joined a political party and then go essentially run one), and his blogging is more of a lazy legacy of pre-socials days, than any principled stand.

Dom Cummings used to Tweet under @OdysseanProject. He later deleted the account & all its tweets in 2017, and focussed on solely his WordPress blog. (maybe if he knew about Micro.blog he’d have felt he could do both!)

Then in November 2020 he apparently started a new account at the same handle. A Beeb reporter - and New European reporting on it assumed it was Dom’s.

However, it’s not Blue-tick verified and now has all Tweets deleted, so I see little reason to believe it is. 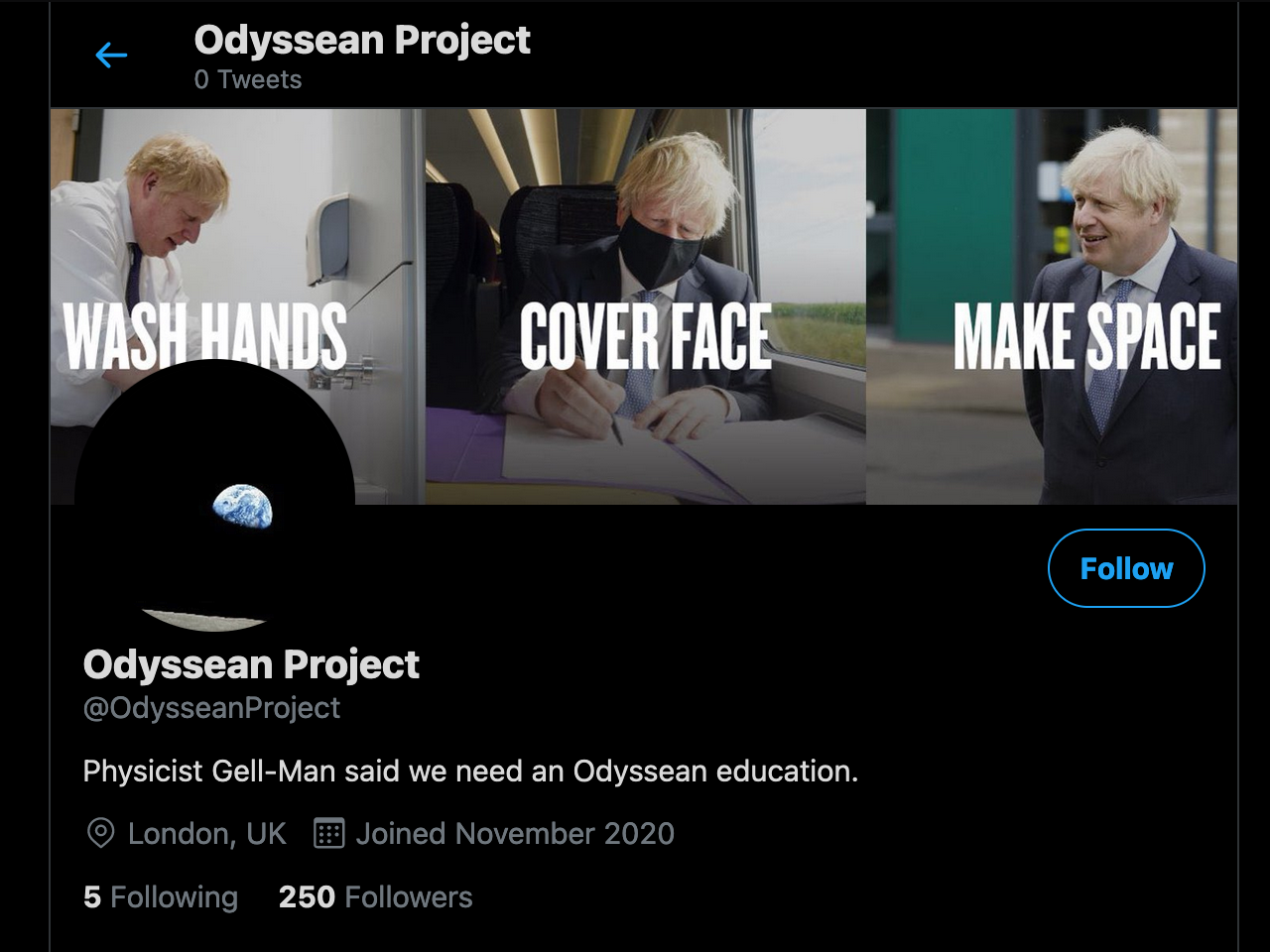 Questions:
Would it say Nov 2020 if he restarted it himself, or was it as if he was like anyone else claiming the handle (side-note: someone else really should have).

Why did he come back onto Twitter and then delete all the Tweets again since? Was it a late attempt to bolster popularity & sense of normalcy to keep his job?

Well anyway thank goodness he did because he’s inadvertedly proved the viability of press relevance without Big Tech Social silos.