My notes on #MeghanHarryOprah: half sym/em-pathy for Meg - half yearning for higher standards on clarity, devotion to facts & skilling up about the internet in light of my https://Archewell.Name experience | #tech

Read previous article: “You’ve heard about the Litigiousness of #HarryAndMeghan: This Week I Experienced it First-Hand” for why I’m taking special interest in the event, and why I’m bringing an unusually analytical eye to an entertainment piece, in terms of how they approach language & information, rather than just ending the piece after saying “they seem nice, and Meg made me feel the tragedy of conflict, racism & human suffering in my bones” which is equally true.

I’ll continue with use of Initials in that section, partly because a) when it comes to serious business, names are something they take very seriously! b) it saves time c) The best piece of writing about Hollywood - Zadie Smith’s “Ten Notes on Oscar Weekend” (2010) - didn’t mention anyone’s name

With my Cerulean hat on (which is green btw, and loves to entertain royalty), I can’t help feeling the effects of a well-produced documentary film.

The suicidal thoughts segment (46’ - “it was happening because I was breathing” line in particular) landed hard for me, partly because I’ve been through similarly dark times, sometimes involving bumping up against old British institutions.

In fairness to Piers Morgan, I think that until you’ve actually experienced such thoughts it is difficult to imagine people would. Which is why it’s brilliant that Meg is showing bravery & leadership promoting these important conversations.

But unfortunately she may not be the best messenger when it comes to inspiring complete trust to conveying accurate & timely information. Time to move onto the analytical take:

Before watching I micro-blogged:
“Looking forward to see whether H&M on O tonight a) Promote further Discussion on issues, or b) try to final word & Stifle it unnecessarily.”

Unfortunately, the history of Twitter (a musical retelling of which I’m working on) suggests otherwise. Shaming others based on limited information rarely ends well. The greatest public service is to help provide clarity, and leave doors open for other side to do same.

There was some of that, but also a lot of the opposite. In particular M’s take on the piece that has already captured most attention:

The fact is it is not a safe assumption on at least one count, the count of princehood: A could only possibly expect princehood from his (officially recognised) grandfather C’s accession to throne. Should we assume M’s omission of this nugget which everyone else Searched as they watched is a case of M’s search-engine-phobia or part of an effort to create a final-word win on an incident.

Let’s compare some statements about what M has knowledge on:
Knows: Princess E before H | Ignorant on: Royal Family
Knows: What royal family looks like from outside | Ignorant on: her own husband’s internet presence

Etiquette is a tool to ease confusion (“Etiquette is about feeling at ease, and putting others at ease, in a variety of social situations”). It used to be the domain of royal families to set the code.
But the royals have abdicated any moral leadership setting ettiquette on discussing thorny issues on the intersection of science (past & present), economics & language like ethnicity-race & gender-sex (to use both their more & less ambiguous terms). Y’know by like not investigating Epstein’s buddy.
The rest of us subjects are left completely uneasy. These things, are we supposed to ignore them for minor phenotypes that our ancestors have been wilfully confused about, or recognise them as a social realities and talk about problem-solving it loads, like back-to-back seminars?

If it makes you feel any better, M & O seem confused on that too.

Assuming firstly that The Conversation about A’s skin-tone happened with M present, O treated it as a taboo-subject “who was having that conversation?!” which seems to convey an aspiration toward MichaelScott style ‘color-blindness’. 20 minutes later, O herself was trying to talk skin tone (66’) about Meg’s mother, only to be told quickly brought back on track by the younger party as not being relevant!

M is more consistent by being less squeamish. Repeated references to skin colour & race, including speculating with O that M’s race could be an asset viz. Commonwealth. And yet still no clarity from M on whether The MysteryEnquirer’s identity is “too damaging to name” because she thinks a) failure to include her in convo made the convo nefarious or b). subject matter itself makes it damning regardless. Why not clarify that?
The public are left guessing, and I’m sure many “feel like it’s a safe assumption” - to borrow one of M’s very own phrases - that the answer is b, and when M&H say to us “talk more about race” they’re actually just trying to bait the bigots (the one guy in the Good Lad workshop who wants to keep saying “but what if”). Raising the occurrence but failing to reveal identity leaves the topic in eternal taboo-and-ambiguity-land. Royals have already closed ranks on Mystery Enquirer so no one will ever know. (valid choice becasue Royals can’t dictate etiquette on this topic, so simply await in silence until etiquette is clarified. Such a consistent etiquette - that commands respect of a majority of a Western Lib Democracy for a full calendar year - will never exist except under a totalitarian legal regime).
Amidst this miasma of ambiguity, “an assumption” on this topic might ‘feel safe’ in a sense of M feeling safe to say without being disputed - but did it “feel safe” with regards to likelihood of truth, which surely can’t be assumed in such a guarded & complex atmosphere.

Ambiguity on thorny issues to be expected though, so where’s the discussion at in terms of clear definitions about terms like ‘royal’ and what it entails:

Nope everyone - this is the Royals themselves too- seem fundamentally confused about whether being a Senior Royal is a job/employment/work for a family business, and if so if it’s part-time, full-time or overtime - or is it some some sort of non-job main-side-hustle-duty extended family Christmas party (47’ , 51’) Similarly confusing as asking an influencer in Dubai if they are at work or on holiday. They’ll tell you a different thing each day, and sometimes they will post asynchronous images to mislead you.
The Royals are the O.G. influencers (now impotent, see above) so they’ve been playing the work-play ambiguity game much longer.

The Privilege of Ambiguity

H himself seems to recognise that ignorance - manifesting in say digging out the old Hugo Boss end of the Saxe-Coburg dress-up box for fancy dress - is cushioned by privilege (79’), and therefore Royals remain trapped in a miasma of ambiguous unenlightenment until they cross paths with a Magic Pixie Dream Girl.

But H doesn’t seem to have snapped out of the ignorance. In fact he - and more surprisingly M - seem positively proud of it:

Probably the strangest - and most British - self-deprecation from the couple was their repeated attempts (90’, 95’) to make a virtue of “not having a plan” for what is now Archewell Audio & Productions.
A certain amount of open-mindedness is possible for the sheer breadth of areas they are attempting to police the use of the word Archewell in (as per the belated trademark) and anti-deodorant campaign.
But why go to such lengths to claim you didn’t dream of working with the biggest tech players in Hollywood (or to coin a phrase ‘Silicon Alley’ - the side-street hustlers peddling Silicon Valley’s products) when one of you had that prior career albeit before “The Streamers” came in as Harry puts it?
Is this simply tech-squeamishness? Like squeamishness to admit we hit Search on loved ones names? Like my squeamishness when one of the first American technologists explained to me that smartphones have already made us bionic?

An opportunity for clarity

If so, getting more tech-savvy & assertive about it is an area they really need to work on if they want to pursue secular political leadership, as I’m fairly confident Meg does.
Young political leaders need to be extremely well-versed in the internet and unafraid to speak to its truths.
They position themselves as truth-telling leaders-in-exile, in the mould of Ed Snowden (hey could they team up and balance each other out?), Alexei Navalny (he’s pretty much a full package already, if he can survive 3 years in Siberia) or AOC (again full package) if the Dems eventually kick her out for blocking Covid spending.

But the difference is, those individuals actually know the internet deeply.
Instead, M&H have got people. People like the lawyers I described in my ‘litigiousness’ post.
If my IBM Cloud’s email had slipped through the cracks to Carrd, or - praise the lord - Carrd actually refused IBM Cloud’s request - and 200k websites got pulled, websites of struggling entrepreneurs trying to enact carefully balanced plans, and we told M&H what had happened, would they:
a) learn what a hosting provider is
b) not, and be confused

My guess is b.

Maybe we’ll find out if their lawyers send one of their magic letters to Cloudflare about the new site.

In the meantime, I’ll stay confused, and curious, about what these two are up to.

You’ll have gathered based on the publish time I took my 1 night staying up after 9pm on this, as it’s unusual I’d weigh-in on such a emotionally charged pop culture topic with the analytical mindset I’d usually reserve for technical topics.
Like all my posts, I welcome feedback open to making transparent & declared edits if needs be, but particularly here as it’s a new combination for me. Much more likely to implement suggestions if thrown as an alley-oop, rather than dunk. 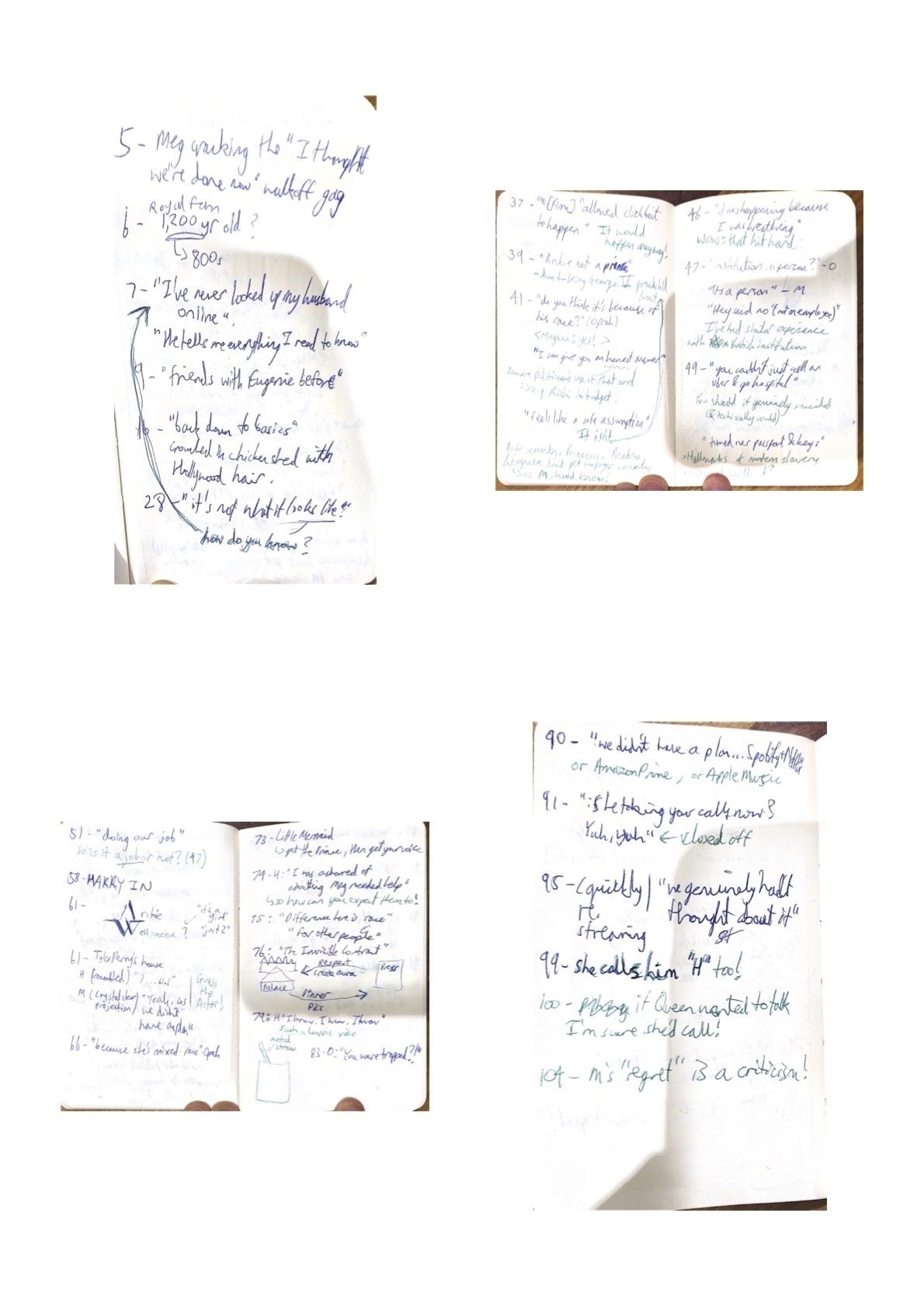