You've heard about the Litigiousness of #HarryAndMeghan: This Week I Experienced it First-Hand | #tech

I own the web domain archewell.name. I had created a simple one-page website there that was transparently a fun attempt to spread awareness about a (untrademarked, future) brand name, and then spark a conversation about the creative process of branding more generally. Last week, it was taken offline. Please visit the site to read more about the story of how & why.

Here is a more personal commentary on the wider significance of the case.

Hereafter I’ll refer to those folks as M&H, because a). I wouldn’t want to infringe on any Swedish companies precious trademark! and b). it’s a more accurate ordering of who runs their show.

Naivety about controlling the Internet

There’s currently estimated to be over 3,566 TLD extensions. You’re never going to be able to own them all.

Until you’ve got a trademark, you’re gonna wanna buy all the ones you want up. You can’t just expect to claim them retroactively (see Appendix).

If you really want a specific one: you’re gonna have to negotiate with the owner for it. If you can’t reach an agreeable deal, time to get creative with a DomainH.ac/k (.ch domain perhaps).

Rightly, they made a prioirty of registering (at GoDaddy… yup we all got our first domain there, FFuuc.cYou/GoDaddy) the .com early on. Sorted! Maybe sweep up with some other big hitters: .org (v charitable!), .co.uk (if you still care bout blighty), forget .net its over.

The other 3,560? Let ‘em be. Imagine they are like savvy people @-ing you in the early years of Twitter. The only reason you should pay an owner any further attention is if their content is specifically damaging your brand. In this case, I don’t believe our content was.

To the contrary, it actually served a useful purpose: it transparently relayed quotes from M&H’s official press release, by no means did it purport to BE M&H. The site was even courteous enough to point folks back to the search engine at the end if they didn’t wanna find out more about branding from me. Given that M&H failed to get a site live at their .com until October according to the Wayback Machine, this served a positively useful purpose for that time, and non-negative beyond that time, which was when the lawyers got involved.

Though in Aldi’s case they were legally justified, it was still a mis-step of Aldi to seize without compensation the similarly tangential domain ILoveAldi.com in 2015 because the site was wholly supportive of their mission. It’s amusing that only 6 years later, there’s a whole industry called “influencer marketing” desperate for people to create organic sites exactly like that, and I wouldn’t be at all surprised if Aldi had done so.

Even if they aren’t open to reaping benefits of supportive sites, M&H seem to think they can control a lot about the online world. I’ve written previously about British political leaders underestimating the sheer complexity & chaos of the internet. M&H should be more discerning about controlling the most severe breaches, and embracing the freedom of supporters to promote them in creative ways.

.name should never have been a vitally important tld for their brand, though since the attempted site takedown, I hope it will now take on added significance, as archewell.Name now says something more general about how powerful people try to own (invented) Words & Names. Invented words are the basis of our beautiful evolving English language (I offer mine up freely in dictionary form), and its broadly free usage (violence & other 1styear-undergrad-politics exceptions aside) is a vital value which we must preserve on the internet in the face of surveillance capitalism & overambitious information controllers.

And yet, what did they do instead? Paid expensive laywers (my best guess - based on a matching surname in the letter IBM Cloud received - is Archewell’s California law firm Stone, Genow, Smelkinson, Binder & Christopher) to issue some magic incantations - referred to knowingly by my service provider Carrd as “cease & desist” letters - that are so sweeping & vague that I can only assume they were issued to every single domain associated with this word.

And as you can tell in my case, even pretty powerful organisations (IBM) seem to cower in fear at these magical missives.

A cease & desist letter, in fact, “is not a court order, so it isn’t legally enforceable. The letter contains an opinion, while notifying the (supposed) offender that they’re intruding upon a trademark.”.

Believing they’ve dealth with web domains, they are now going on an expedition, going after a deodorant maker in the Phillipines, who I’m glad to say is resisting changing the word printed on his bottles. At some point that may not be a viable option (given his later timing / the injustice of the world) but I commend Mr. Soriano for doing so as long as possible.

Joe Lycett (FKA Hugo Boss (FKA Joe Lycett)) has done a fantastic job at removing the cease & desist spell by poking fun at them. I allowed a modicum of humourous irony on archewell.name as regards retroactive complaint, but mainly wanted to stick to the facts, so here’s the rest of the irony about the specific folks involved:

The Shoe on the Other Foot

In case anyone hasn’t noticed yet, there is an overarching irony about M&H’s being so imperious about a word. I’ll spell it out:

But let’s give them a chance to show us how it’s done. Presumably they’ve taken down SussexRoyal.com right?

The site is alive & well today!

Over a year after the Royal Family asked them to stop using the word ‘royal’, as recently as Feb 26th there was no update or mention of brand change, and in the last few weeks the only clarification has been a subtle link-out: 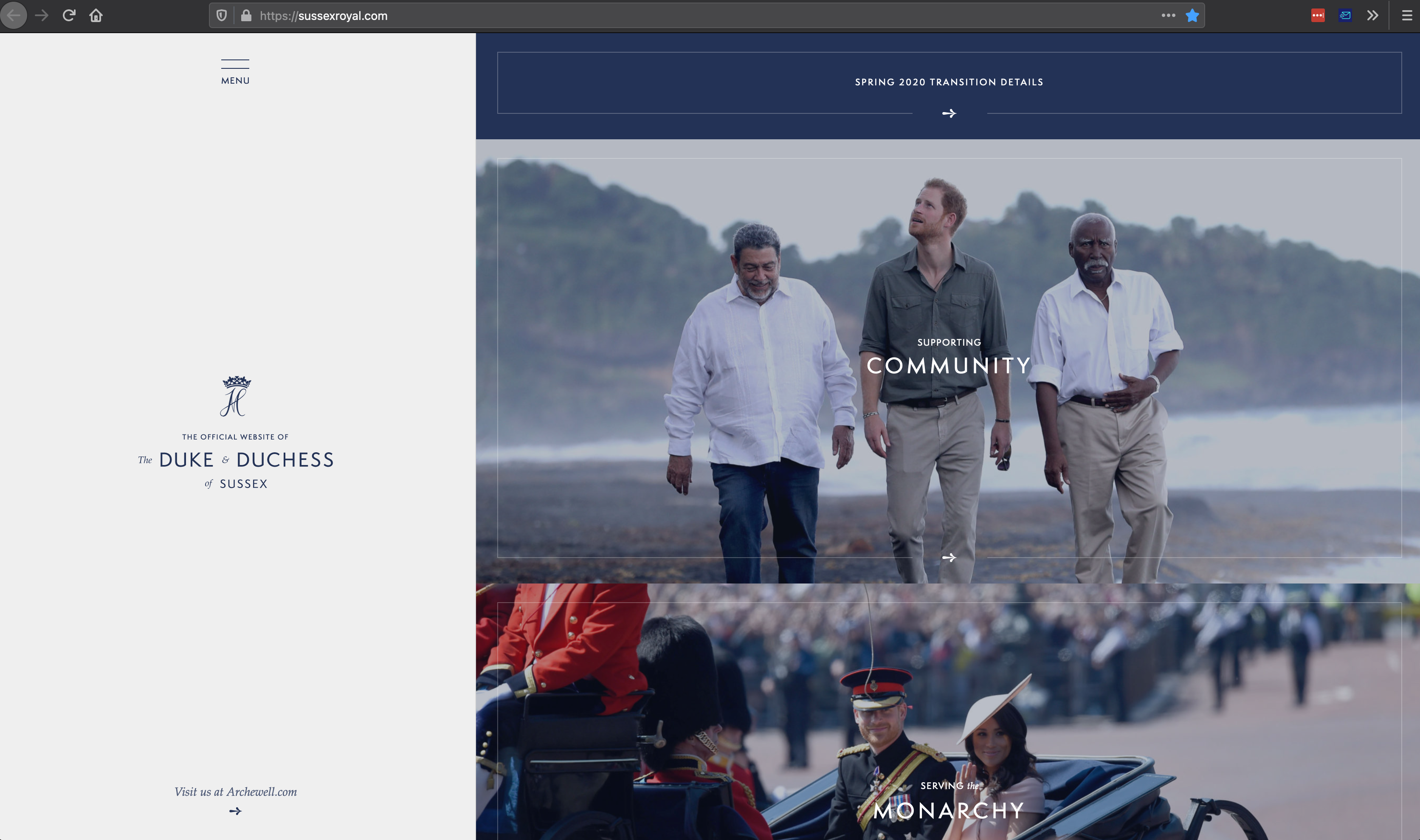 And yet they have lawyers send out letters which they know can put hundreds of thousands of websites at risk (Carrd have told me this did actually occur in 2018 when an abuse ticket fell through the cracks) unless taken down within 72 hours.

Yes they are just words, but these letters can cause genuine, massive sticks & stones and should be used as minimally as possible.

I actually have a ton of respect of M, and can totally see why H would sacrifice so much for her (not to mention to live in one of the world’s sunniest & healthiest places, where I hope myself to one day find a base for at least a couple of years). I was excited for them to try to forge a positive new brand without the crutch of royalty.

M has many of the skills of a modern social leader, raising consciousness of important issues through scalable online content.

But they will not succeed oustide the royal family if they are seen to be retaining the regal posture of “one rule for us, another for everyone else”, and more generally failing to enact values they so vehemently espouse.

For instance in this case alone: let’s think about privacy.

M&H should look to fine-tune their own information output, and partake less in aggressive bulk cease & desist letters - a blunt & expensive form of censorship, that has little upside and is costing them greatly.

I know M&H are pretty busy right now (I heard they’re making a voluntary appearance on British TV screens tonight). But whilst they seem to enjoy escaping obligations or interactions with folks from Harry’s birthplace, they might do well to keep some friends & supporters around on this side of the pond.

Maybe the sort that can help them think through building a more humane, less litigious brand online.

An IP attorney on Quora: “To seize a domain name, you must have proof of Paragraph 4(a)(iii) of the UDRP Policy, i.e. “the disputed domain name was registered and is being used in bad faith.” In the case of Pedro Amador Lopez v. Visel Ce, Case No. D2008­0671, the Sole Panelist held that “when a domain name is registered before a trademark right is established, the registration of the domain name was not in bad faith because the registrant could not have contemplated the complainant’s non­existent right.””

“If you are establishing a new business, remember to research available domains first, as it is unlikely that you will be able to claim the rights to a domain if it was in existence before your brand was trademarked.”

Minutes after publish: added https:// to all links to ensure they go out correctly