To celebrate getting IMDb Pro to manage my new page IMDb.me/Cerulean, I’ve decided one Amazon account is enough, so I’m moving my personal account to a better product: Letterboxd.com/Seerulean (get it?!) 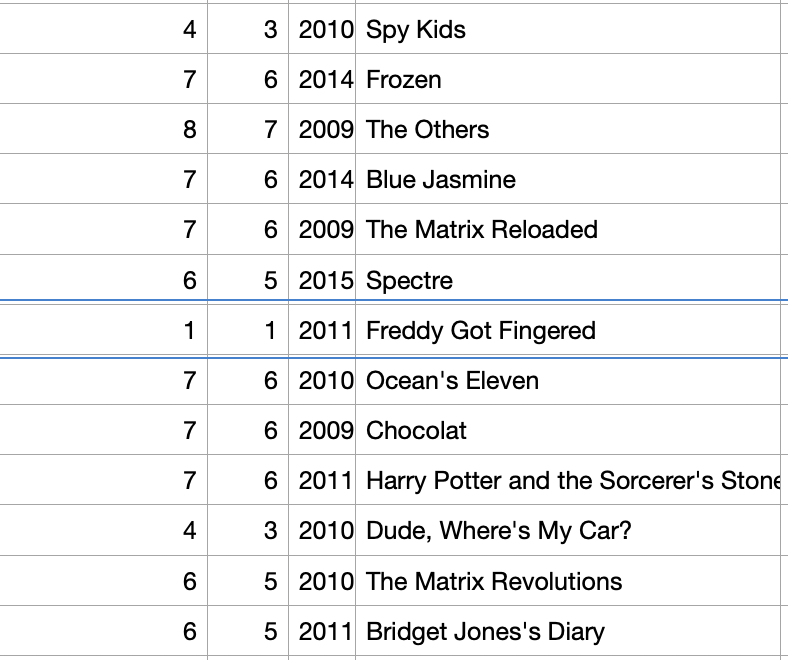 Taking the opportunity to temper my youthful exuberance with a cheeky 1 star downrating to everything, though, I’ve had to make special dispensation for “Freddy Got Fingered”:

Though my average rating was 6.8, already a half-star lower than the average IMDb rating for the same films (probably part reversion to the mean as I biased my film selection towards overrated top 250, part projecting single-mindedness), I want to bring it down to center nearer the midway point of 5.5 by taking 1 star away from each.

This is because I want to approach Letterboxd ratings as relative to my watch habits.

So let it be known: if a critic gives your film 2.5/5, they genuinely are saying your film is worse than the average film: they had just sat through A Tyler Perry sequel, the third film in a Marvel spinoff & an experimental Polish film and decided yours was, on balance, sub-par. All I’m saying is that its worse than the average film that I watch. And these days, I’m generally not putting myself through Spy Kids & Dude Where’s My Car, more so Doctor Zhivago, Singing in the Rain, so don’t feel bad next to them!

Please take a quick peek at my ratings (especially lower ones) and let me know if you think there’s any I should nudge back up to their previous (now relatively higher) position: I’m looking at you films with realistic depictions of struggle or love, which I know doubt underappreciated in my teenage years: looking at you: Silver Linings Playbook, Whiplash etc.