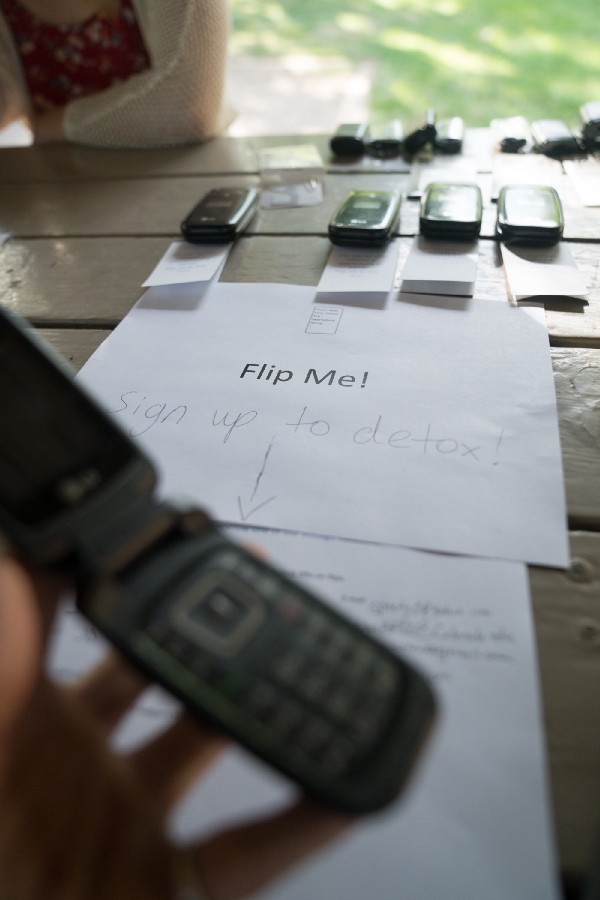 On my Fulbright researching technology addiction, I started a campaign to #GetPhoneSmart, a journey of re-evaluating your digital life which is best bugan by following Cal Newport’s advice to do a Digital Declutter. My team at the University of Chicago invented a version the kids would find fun: an Insta-braggable communal challenge to flip to retro tech called FirstWeekFlipPhone!*

Though the challenge is now on pause (until we find the right mental health charity back in the UK to partner with), one of the core insights shared by our Detoxers as well as Cal’s is that Instant Messaging (IM) can be a huge mental burden. E.g. see this young musician describe the weight a week off took off his shoulders.

In HumaneTech’s brilliant DesignGuide, Attention is one of the key human sensitivities that empathetic tech should be designed to respect.
In our age of communications overload, this is more important than ever.

Email as The Backburner… Rise

In the 18th Century, all they had was text. Scientists estimate around 2/3 of communication information to be conveyed in body language and another 30% in vocal tone, meant it was very difficult to convey rich information through text.

Perhaps that’s why Elizabeth & Darcy played mental mindgames of “he thinks that I think that he thinks” over the days waiting for letters in response.

No surprise that Victorians were overjoyed at the invention of the telephone, because it was instant, and you could use your tone of voice to convey meaning. I’ve drafted a categorisation of modern modes of communication into richness: 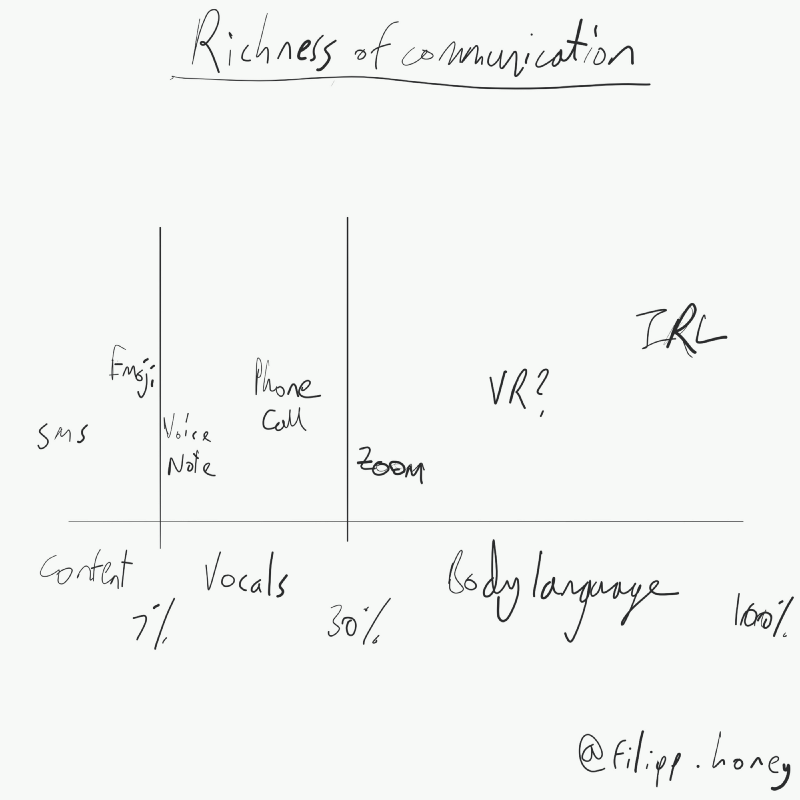 But back in text-only land, we shouldn’t expect much.
IM is messy because there are no clear cues. Conversation, like all improv*, would not be possible without being able to look up at your partner and know when they’ve stopped speaking (which is why IRL is further along the scale than a Phone Call).
Like the video here, people are spending hours a day in the mess of IM timing misfires. And that’s just with a 2-person IM.
Think of being a thoughtful introvert in an 8-person Group Chat: the irrelevant side-chats are excruciating.

In an internet of infinite possible conversations, prioritisation becomes key. Separate your communications into those which need an urgent response and those which don’t. I send email to signal that I don’t expect a response for 1 or 2 days, whereas I expect one within hours on IM.
Batching should be encouraged with email. Like the morning letter writing session in Jane Austen’s time, you deal with messages efficiently with minimum context switching. Search means that in the rare case you need to access a message more urgently, you can find it.

Email as The Backburner… Fall

Apple Mail iOS started it.
The combination of notifications which made receipt faster, and an ingenious marketing ploy (‘Sent from my iPhone’) which excused sloppy writing; the Mail app became just another IM.
Or should I say, a worse IM. It’s neither secure — nasty hackery like domain spoofing is relatively simple whilst we’re still using SMTP — nor private — ProtonMail and Tutanota aside, email (read ‘Gmail’) is not encrypted, so the text can be readily scanned, as they flagrantly are by email clients like Edison and ReturnPath.
Even Facebook, bowing to competition from the brilliant Signal, took a surveillance capitalism hit and adopted their encryption protocol in 2016 for WhatsApp, putting it ahead of email on privacy.
So it’s this mediocrity that the average American spends 5 hours a day wallowing in!

Superhuman: “rebuilding the inbox from the ground up” — the missed opportunity

Clearly it needs rebuilding. But does Superhuman do it?
It’s a third party email client for Gmail — much like Edison Mail on steroids — with some brilliant features drawn from Gmail extensions, like Boomerang’s return, Yesware’s read-receipts and their very own Rapportive’s intrusive social media feeds. And aneven more ingenious marketing ploy from the Veblen playbook (‘Sent using Superhuman’).

But the one simple feature they chose not to build: (Boomerang’s) Inbox Pause.
It’s not hard to do in a simple fashion: a custom label applied to all incoming email to put it in a searchable corner. Sure it could be done smart, and perhaps one day Superhuman will (after a full year of lobbying, through my * feature tracking) they eventually said in August 2019 it was coming ‘this quarter’. 7 months later.. still nothing.

Perhaps it’s in Superhuman’s interest to keep email as IM.
People spend more time there (after all addiction is the dark side of Silicon Valley’s quest for ‘engagement’).

But I don’t want to spend more time in email. A productivity tool is meant to help you spend less. So I kicked back up Boomerang, and started suing Inbox Pause on top of Superhuman (a bit like jumpstarting a Ferrari with a Robin Reliant).

To their credit, Superhuman have a legitimate monetization strategy, one they would recognise in Jane Austen’s time — actually charging people for the product — meaning they may not need to practise the data harvesting that Edison do, they have still made no strong privacy commitments (except specifically on location tracking after a public outcry), and one imagines their recent first Analytics hire has access to some pretty… interesting data.

So I’m going to stop paying $30/month for a hacky solution, until either:
a). $30 is small change to me, like for many Superhuman scions: VCs, CEOs etc.
b). Superhuman follow the HumaneTech DesignGuide more closely

Meanwhile, I’ve trialled switching my custom domains to ProtonMail Plus (starting with [email protected] where you can hit me up directly with feedback). It’s been a brilliant experience. They have developed an encrypted Bridge* to AppleMail (though I’m still trying to decide whether to connect them together or separately).
I’d also consider FastMail (though are there any native desktop app integrations, and is it any more secure than Gmail?).

I’m still tied to some Gmail and a G Suite. If you’re there you may as well make the most of it with the integrations. Boomerang’s Inbox Pause comes for free, but I still need the core feature for which they are named. Unfortunately they don’t serve their $5 Plus product to G Suite users; so I’m looking for another 3rd party which does a good ‘Remind Me’ / ‘Snooze’ integration.
* EdisonMail let you turn off use of your data (but they still scan them seemingly). If you trust them enough, they’ve just released an awesome Mac app (here’s the referral you need to get in).
* MailButler have a $9 product for AppleMail. Anyone used it?

Superhuman does well, because many people are sick of the tech mantra:
“If you aren’t paying, then you are the product”. Unfortunately, Superhuman proves that you can still be the product when you pay (a lot).

Superhuman: I’m putting you on Pause.